Webinar: AI for Decision Support in Tissue Characterization with ICG

The next ISFGS webinar will be presented by Professor Ronan Cahill on the very interesting topic of “Artificial Intelligence for Decision Support in Tissue Characterization with Indocyanine Green and Near-infrared Endolaparoscopy“. The webinar will be held on Thursday, 24th September at 9am EST USA. Registration can be made here

The presentation will discuss the determination of tissue perfusion in esophageal and gastric surgery to reduce the risk of associated complications. Additionally information related to Fluorescence-Guided Lymphatic Mapping in Esophageal and Gastric Cancer will also be discussed. The webinar is approximately 30 minutes followed by a 10 minute Question & Answer session to answer any questions you may have. Reserve your seat by registering today!

Professor Ronan Cahill graduated MB,BAO,BCh (Hons) from University College Dublin in 1997 and then completed his basic and specialist surgical training in Ireland, gaining both MD by thesis (Health Research Board Clinical Research Fellow) and FRCS by examination. Thereafter, he was a clinical fellow at the IRCAD/EITS Institute in Strasbourg, France from 2007 to 2008 before moving to the Oxford Radcliffe Hospitals as senior fellow and then consultant and senior clinical researcher from 2008 to 2010. Ronan returned to Ireland in 2010 as consultant general surgeon (specialist interest in colorectal surgery) at Beaumont Hospital before taking up the position of Professor of Surgery at University College Dublin, and the Mater Misericordiae Hospital in June 2014.

He is a recipient of both the Bennett and Millen Medals (RCSI Millen Lecturer 2010) and was the ASGBI Robert Smith Lecturer in 2014. He has authored over 150 peer reviewed publications, five book chapters and four National Guidelines. He is an editorial board member of five indexed surgical journals, including Colorectal Disease and the European Journal of Surgical Oncology and is a member of the SAGES Research Committee (SAGES Career Development Award recipient 2009). He has a major academic interest in Surgical Innovation and New Technologies and active basic science, clinical and device development research partnerships both nationally and internationally. 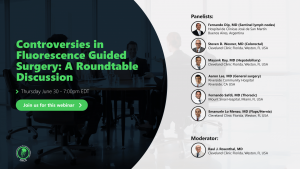 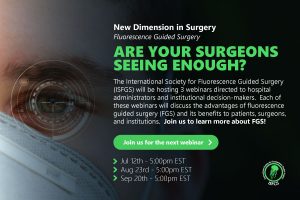 Check out recent Diagnostic Green co-sponsored webinar on fluorescence imaging presented by some of the world’s leading practitioners.